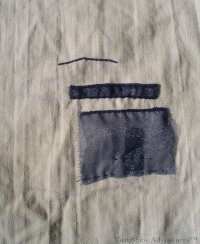 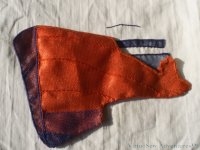 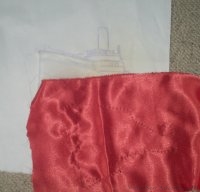 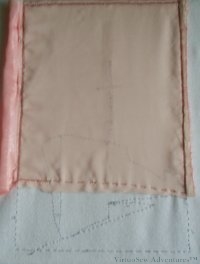 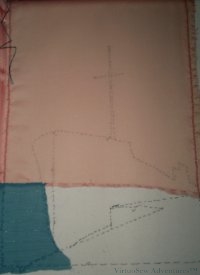 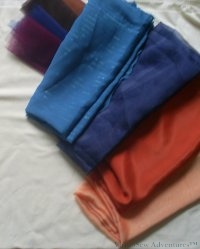 So here are the final colour choices for the Camberwell Panel, after much deliberation.

I wanted to maintain the flat expanses of colour used in the posters, together with the slightly unreal colours, but at the same time, I did not want to create a wilfully unrealistic colour scheme. So although I decided to use apricot organdie for the sky (after all, we’ve all seen strange colours of sky, haven’t we?), the fabric for the sea was a blue-green georgette, and for the hull a dark orange crepe-back satin, crepe side out. The dark orange is close to the terracotta/red lead colour often used on merchant shipping, while sitting comfortably alongside the apricot. Then I picked some fragments of net in a variety of dark colours to help with the rough textures of the quayside, and navy blue organdie to help create the shade on the hull. 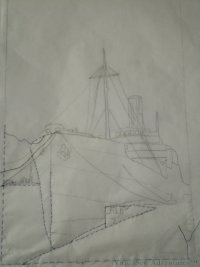 I chose a cream cotton velvet to make a solid, but pleasantly textured background, thinking it would make a pleasant surround when the panel was complete (as you will see, there were some design changes made during the process…!).

This in turn meant that transferring the design threatened to be an exercise fraught with difficulty – right up to the point where I realised that since much of the design would be applied in pieces, all I needed on the background velvet was basic clues for placement.

So I traced the design onto tissue paper, tacked it in place, put the whole thing on a slate frame and went over the main design lines in running stitch.