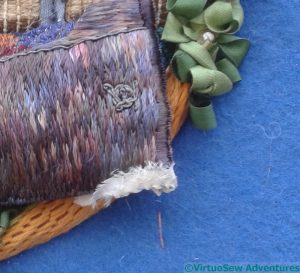 First Attempt At a Bow Wave

My first attempt to tackle the bow wave was to shred some white silk ribbon and try to attach it to the bow. That seemed a bit too white and a bit too solid.

What it did do, however, was give me an inkling as to how tricky the attachment of the bow wave was going to be. “Fiddly” doesn’t come close! And remember, there are a lot of delicate little details already assembled, so I couldn’t be too heavy handed with the attachment, either. 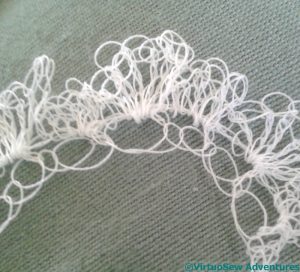 Having decided something lighter was needed, I tried another experiment: freeform crochet. In this case I started by using one strand of a stranded silk, decided that even that was too heavy, and moved on to sewing cotton. I’ve done a sort of shell pattern, but varied the sizes of the shells slightly to give a bit more unevenness to the whole thing. I’ve also crocheted fairly loosely to give the right frothy effect of seafoam. 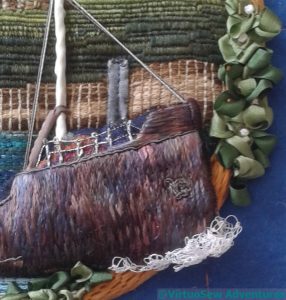 The last few tweaks here are: the addition of the bow wave, and then the addition of railings around the deck cargo on the bow, and finally the rigging. The railings are made using a paper covered wire painted silver and dirtied with inktense for the posts, and two lines of black and silver twist for the chains. They’ve been surprisingly effective in helping everything to sit at its right plane in the sequence from foreground to background.

There maybe isn’t enough rigging for an operational vessel, but the photo wasn’t clear, and there is enough to have point and purpose

View all posts by Rachel
Assembling the Heart →
← More on the Wreath, and Other Details