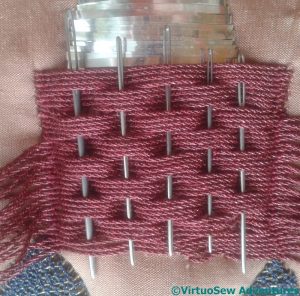 When you last saw Akhenaten I was starting to sink the ends for the headdress. There were so many ends to sink, and so much tugging to do so, that I was beginning to worry that I would lose the texture of the basketweave. So I threaded some old, blunt needles through the floats to keep them raised, and reduce the rearrangements and tweakings I needed to do as I went along. 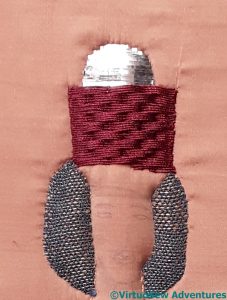 Progress On The Headdress

And once all the ends were duly sunk – which took several sittings! – the crimson section of the headdress did turn out rather well.

The next section will be golden, and will bear the cobra and the vulture heads, but I’m not quite sure how to tackle it, so I’m going to leave the ideas to marinate a bit before doing it. I think it may be separate from the rest, and run up over the crimson, which is why the basketweave couching runs further down the head than it ordinarily would.

View all posts by Rachel
Overcoming The Fear →
← Finished The Amarna Backpack!