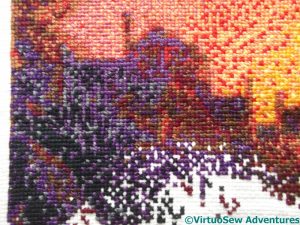 Many years ago I used to design counted cross stitch kits, and did some for the Ironbridge Gorge Museum. I did think of turning a certain very famous picture into a kit, but since we never finished the test stitch, it is just as well they decided not to go with it.

This is something else we’ve found in a fit of tidying up, and thought,”hmm, we should finish that – it will look good!” 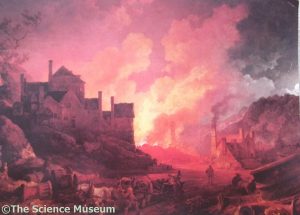 It was done in the early days of computer-aided cross stitch design. I scanned a postcard of “Coalbrookdale By Night”, in the somewhat apocalyptic vision of Philip James de Loutherberg, and then spent some time tweaking the number of colours the computer used to render the design as a cross stitch piece. One of the problems with this form of computer design was that, no matter how much human intervention was involved, the design tended to end up being a bit spotty. 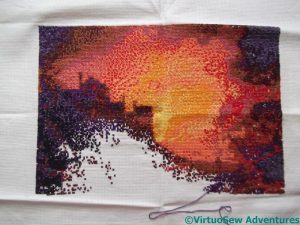 You can see that spotty effect in the detail picture above.

The human intervention did at least result in the removal of the entirely superfluous lime green stitches that the computer package used to scatter across every design it was involved in. I never did understand why that happened, but the first change I always had to make was to change the lime green into something more suitable.

What I have to do now is think of something useful to turn it into when it’s finished….