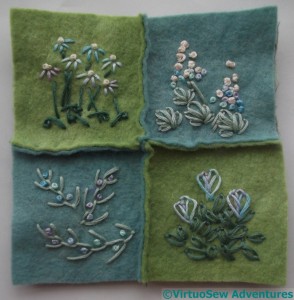 I decided to create a chequerboard effect for the pincushion. The four panels are stab-stitched together with the raw edges visible. I think that makes for an interesting effect, although it can be over-used.

The first panel has a few French Knots, lots of straight stitches, and some singleton scroll stitches around the base of the stems.

The second is lots of French knots, and palmate leaves made of lazy daisy stitches.

The third is primarily lazy daisy stitch, with the flowers made using blanket stitch.

The four panel is feather stitch with French Knots. 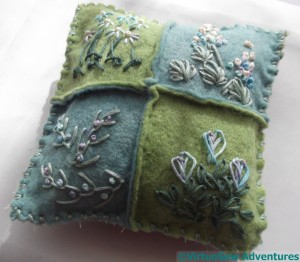 The pincushion is only lightly stuffed. I felt that somehow stuffing it to the point of solidity wouldn’t be quite right, although I don’t know why.

In this case I closed the edges with glove stitch. This is really a sort of variant on overcast stitch, so it isn’t difficult, but – even with shaggy bits of embellished fabric appearing around the edges! – it gives a slightly more “finished” effect.

One of those details that most people don’t consciously notice, but it still has an effect… 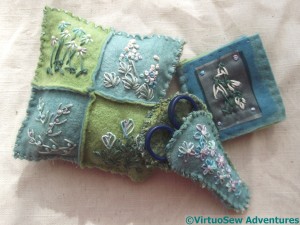 The finished set looks cheerful and springlike, in spite of the increasingly distant relationship between the stitchery and the spring flowers that inspired me.

I’m rather pleased; even if it took me months to find the inspiration, the final result makes me smile!

View all posts by Rachel
Still more work on Topsy.. →
← A Pause In The Modern Stitch Off