I did a lot of staring balefully.

I picked out a whole selection of threads, looked at them, and dismissed them. Partly, it must be said, because I had decided, after all, to use Plaited Braid Stitch, and that uses a lot of thread. I wasn’t sure that I even had enough of some of my choices!

In the end, I decided to use an overdyed pearl cotton in a sort of faience colour. Years ago, my mother managed plaited braid stitch using stranded cotton, but I tend to feel that that is making life unnecessarily difficult, so stranded threads or floppy threads were removed from consideration as soon as I had settled on the stitch…

I must say, I hadn’t expected to find the stitch getting narrower as I became more practised. I had to deliberately broaden the stitch as I got nearer to the start so I had some chance of joining the ends neatly. 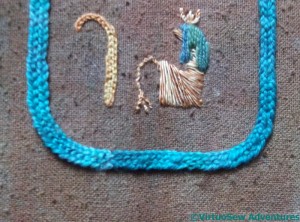 Can You See The Join?

And I really don’t think I did too badly – in fact, if it weren’t for the colour change, I think the join would be rather hard to spot!

And by the way – the dreaded Plaited Braid Stitch is no longer dreaded!