A Delight from the Past

Home | General Embroidery | A Delight from the Past 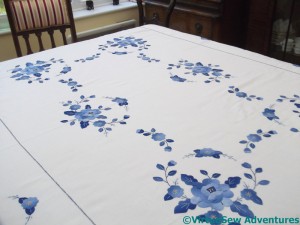 This is one of the most cheerful and striking tablecloths I have ever seen. It belongs to my cousin, who found it in an antiques centre, and brought it home to cherish.

It is crisp, and bright, and beautifully made, definitely by hand, and with some very ingenious Making Do. The lines of stitching marking out the edge of the central section are in a fine herringbone stitch, and in the case of the short ends they cover a join. Obviously the fabric wasn’t wide enough to achieve the length needed, so additional fabric was added at either end, and the joins camouflaged with stitching. This is just exactly the sort of trick suggested in some of my collection of “The Needlewoman” from the Thirties. 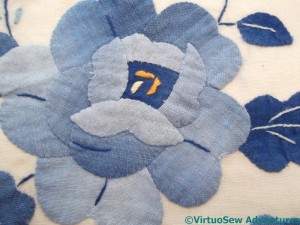 And this close up shows even more. I wondered at first whether this might be an example of bias binding used decoratively – another popular technique in the Thirties and Forties, and mentioned in several of my older books on needlecrafts.

Looking more closely, however, we don’t think so. The fabric used for the applique is rather finer than I would expect bias binding to be, and besides, there’s the unevenness of the colour.

That unevenness, although nicely graduated, is rather straight-edged, too. My cousin and I found ourselves wondering whether the pieces for the applique had been cut from the best bits of an old, sun-damaged piece of fabric, maybe a curtain-lining, or something similar. 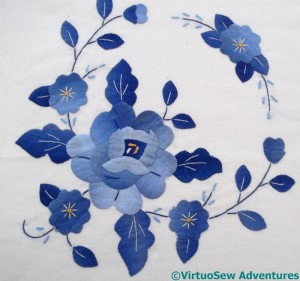 If it is, it is absolutely the most striking case of making a silk purse out of a sow’s ear that I have ever seen in my life.

The selection of the dark and light pieces of fabric, and the way that the large blocks of colour in the applied sections are lifted and highlighted by very delicate embroidery – and just enough of it – speaks of a very accomplished needlewoman indeed.

It is utterly enchanting.