Home | Dreams of Amarna | Final Details on Loading The Felucca – for now! 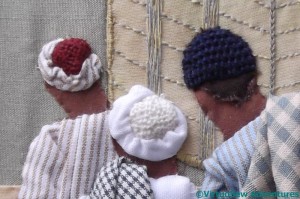 Both of the labourers on the right have a small piece of dark brown cotton attached to their heads to give the impression of hair.

Two of the hats (the ones on the right) are turban-like things with a central section and a twist of fabric, and you’ve seen them before. They were really very successful, but the other two labourers seem to be wearing knitted or crocheted caps. Somehow trellis stitch didn’t seem quite right, so in this case I’ve used detached buttonhole stitch with return, in navy blue pearl cotton.

The final hat is much woollier. I used a heathered worsted yarn and trellis stitch. I have a few doubts about this one, but for now I’m content with it. 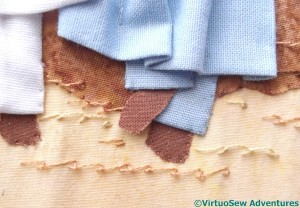 I was concerned that the dark cotton and the light background cotton were too distinct, and made too much of a contrast. My first efforts to break up the surfaces were not as successful as they might have been, but in due course I arrived at the solution – rows of scroll stitch using a single strand of thread, in tones that lie between the two extremes.

I’ve left the little foot unattached, dangling over the sandy surface and seeming to poke out of the trouser leg just as it should. 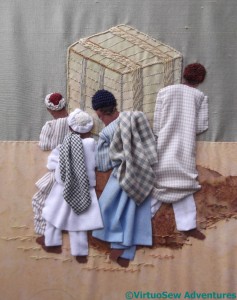 And behold the (nearly) final version.

I think there is just enough of the scroll stitch, and the packing case has almost the right level of detail to make sense, but not so much as to attract more attention than it should. The people have worked, if anything, even better than I hoped they would.

I’m going to wait until I know where in the Dreams of Amarna the piece is going to live – either as a patch on one of the main panels, or as a stand-alone, separate panel – before I do any more. At the moment, I don’t know what more to do, or how to do it, and until I do know, I’m not risking the success I’ve already had.