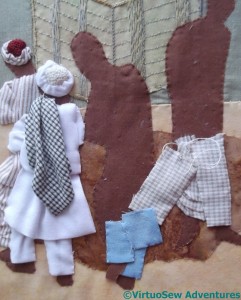 The mini-iron has been very helpful in turning and pressing the edges of the fabric pieces – sometimes before they’re applied, and sometimes afterwards, but at first I was very surprised to find myself wielding it left-handedly, more often than not. Then a little further thought, and it made sense – the difficult part is controlling the fabric, so naturally I would use my better hand.

First of all I started on the middle figure, forgetting that he is the nearest to the camera. So I stopped working on him – leaving his trouser bottoms in place – and moved on to the figure on the right.

Then the pleated drape cause me a great deal of trouble. Then I wasn’t sure about the left leg. Then I realised that I’d used the checked fabric I was intending for the overshirt. 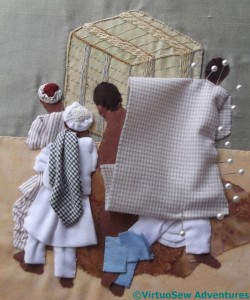 I reinstated the trousers and the drapery in white fabric and then started trying to fit the overshirt.

I’ve been making extensive use of that set of pins that Karen Ruane sent me (thank you again, Karen – they’ve been invaluable!) as I try to work out how to make the overshirt sit properly.

In this case, however, having pinned and stitched, and unpicked and pressed and restitched, I decided I still had some reservations.

So after much more puzzling and unpicking and re-stitching, I think I’m happier now. I’ve reduced the bulk in the left shoulder, removed the drapery, which is in the photo but didn’t “read” well in the applique, and reworked the overshirt.

None of the lower edges have been caught down, which I hope will help create the proper effect of garments that can move around a body. That does mean, of course, that I will have to be very careful not to crush the final piece when I’m storing it, but I do think it will be worth the effort!