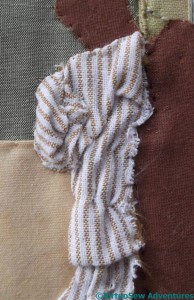 Having stared thoughtfully at the people, I cut out some clothing shapes out of one of my pieces of quilting cotton, and started trying to create folds in them as I attached them to the fabric.

The trousers were tricky, but not impossibly so. The jacket, or top, or whatever it is, brought me to an abrupt halt.

That didn’t work at all, did it.

The bulk and the folds are all in the wrong places. He’s certainly crumpled, but it isn’t the right sort of crumpled! And don’t even get me started on how difficult it was. I felt as though I was all fingers and thumbs – it was almost as bad as working with glue!

Cue much muttering, unpicking, and rethinking. 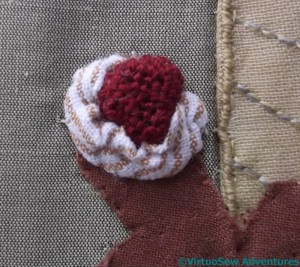 While I was thinking, I had a go at the turban.

The textured deep crimson is a circle of trellis stitch, a densely knotted needlelace stitch I’ve used a lot in my various Thistle Threads courses. The thread is silk, from a bag of “odds and ends” from Mulberry Silks. I cut out a circle of the fabric I’d stitched and gathered it to create a crimson bobble.

The cotton around it is a narrow tube of the fabric I was using, tucked under the crimson bobble at either end, and held down with odd little stitches to create the effect of folds.

That worked. It also gave me a thought. There seems to be very little shaping in the garments we see in the photos from the dig – not least, in such a hot climate, loose, airy, voluminous clothing is likely to be a lot more comfortable!

So the next version of the labourer’s clothing was made, essentially, by cutting out a series of rectangles and applying them separately. In this case, there was only one rectangle for the sleeve, and then another for the body. It’s been gathered in to create a loosely bloused waist, and left flat and unfinished on the inner side where it will be covered by the next labourer’s clothing.

I think this has worked a great deal better. I might even be able to bring my imagined picture almost fully to life!

I’ve also added another layer for the face of the second labourer. There won’t be much of it visible, but the first labourer’s clothes are supposed to be behind it, so the addition was necessary.