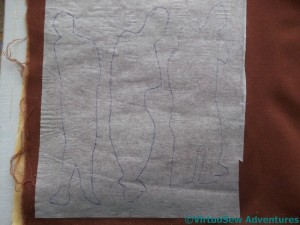 Once the packing case was in place it was time to put the people on. I’ve used iron-on transfer adhesive to stabilise the cotton fabric for the people. It isn’t likely that I will make use of the adhesive, but at least the tracing paper on the back allowed me to draw outlines of the people to cut out.

There was a brief pause while I made quite sure that I had traced the people the right way round to ensure that when I put them on, the fabric side would be uppermost and not the glue side, then I cut them out.. 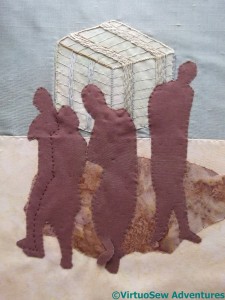 Attaching the people was fairly straightforward, using single strands of silk pulled from a bundle of odds and ends. I even tacked them in place with silk – which just shows how cavalier I have become since working with metal threads and Gilt Sylke Twist!

Very little of these cotton people will show once I’ve dressed them. They are there for two reasons – because I felt that it would be easier to do that dressing if I had some sense of the bodies beneath, and because I know from working on the Camberwell Panel that small bits are hard to place precisely, especially in conjunction with other small pieces. Since the people are inside their clothes, putting the heads and feet on last would put them out of kilter in comparison with everything else.

I have cut and left unattached one foot of one of the people because I need to put a trouser leg behind it, and roughly stitched a line between the two people I’ve cut out as a single piece of fabric. That should help me to ensure that when I dress the furthest of them, I don’t use more fabric than I need, or create a finished, turned edge that adds thickness where I don’t want it.

Now I need to stare thoughtfully at the photograph for a while and work out just how to approach the next stage.