Further Experiments for the Glittering Nightcap 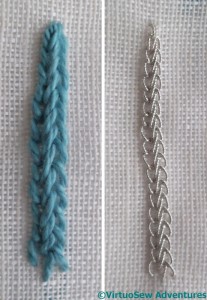 Continuing my idea of using different stitches on the brim, I spent a little more time experimenting with stitches mentioned in Jacquie Carey’s book “Elizabethan Stitches”.

As I have mentioned before, the difference in mental models between a braidmaker and an embroiderer are clearly considerable, since although the diagrams are very clear, I spent much longer than I would have expected in puzzling them out, especially the Holly Braid Stitch. Eventually I decided that it needed a much stiffer thread than pearl cotton, and indeed, the silver thread version came together much more easily than I expected. 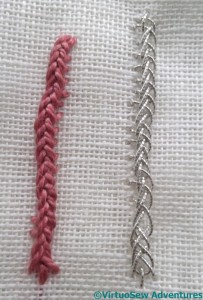 The Double Twisted Chain Stitch was much more straightforward to tackle, although wrangling the thread was quite a challenge at times – as you can see from the uneven stitch size and tension.

The Holly Braid Stitch is a little like a plaited braid stitch in that almost all the thread is on the surface in a neatly interlocked, textural pattern. It also uses up a lot of thread – maybe three or four times as much as the ordinary Reverse Chain Stitch that Tricia suggests for the stems. Unfortunately, I don’t think I have enough of the gold #381 in the kit to embark on stitch choices that are so profligate of thread, although if I find a spare tube in my stash, I may change my mind.

Nomenclature is a constant source of puzzlement. What Jacquie Carey refers to as Trellis Stitch – and offers an Elizabethan version for – I think of as Single Brussels Stitch. Jacquie’s is worked upward from the base cord, while Single Brussels I have always worked downward. I think I need to try again with these stitches, using something other than a metallic thread, because neither of these patches looks quite right!

Elizabethan Twisted Braid Stitch was rather more fun. Most of the thread is at the front of the fabric, making it a good choice for a metallic, or other expensive thread. The appearance – when the eye isn’t completely dazzled by sparkle! – is of an alternating twisted bar and straight bar. I clearly need to work the stitch for longer to learn to keep it consistent in width and to learn to alter the stitch length for differing effects, but I was pleased to find that the structure of this one made sense to me quite quickly.

Elizabeth Twisted Chain differs from the modern version in that both of the ends of the stitch are inside the loop, instead of one in and one out as in the modern version. It’s also worked in reverse – although that, I find, is no longer a challenge for me. The reverse versions on Chain Stitch are so much easier to work in metallic threads than the ordinary version that it is becoming second nature, and faced with a thread that is difficult for other reasons, it is also becoming second nature to consider whether working in reverse might help.

It is a constant source of delight to me to find that the things I learn, and the things I thought I would learn, are not always the same. The Online University courses, and my own experiments have given me more, and different, strings to my bow…