Both Edges Reached, and beginning to fill in a gap…

Home | Goldwork | Both Edges Reached, and beginning to fill in a gap… 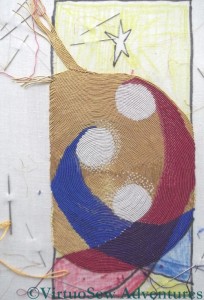 I’ve become rather obsessed with making progress on the Christus Natus Est panel. Now that the spiral is finished, and the gold couching only stretches from edge to edge, that progress becomes easier to see.

In particular, not only have I managed to finish the top of St Joseph’s head, and run two or three more rows across the bottom of the panel, but I’ve started to fill in the gap between the spiral and the breakaway line. In fact I’m not sure that I am entirely happy with it – I may have begun to use single threads on both sides of the triangular shape a little early, which leaves some gaps in the coverage.

I will have a lot of tidying up and corrective stitching to do, even when the whole fabric is covered with gold. I need to finish the Christ Child’s halo, and put St Joseph’s in place. I also need to correct the curve of the Virgin’s gown, which is a little flat and straight.

I don’t yet know whether I will stitch rays coming from the star. I think that decision will be made only when the rest of the piece is finished.

I’m beginning to think about the mounting and framing of this piece. I think it will need a wide mount, because such a vibrant piece will need plenty of air between itself and the frame. One possiblity involves a mount covered in cloth of gold or gauze, and trimmed with braid or crystals. If I can’t find a suitable fabric, I will have to hope for a mount card in the right shade of gold. A cream mount would look insipid, and a mount in one of the colours would contend for attention with the panel itself. It’s just as well we have a good framing shop nearby!