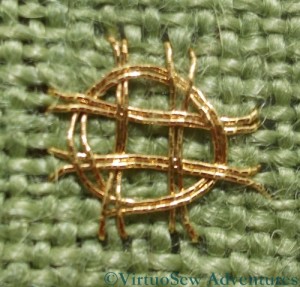 I know I’m always talking about scale on these stitches, but I’m pretty sure that at a reasonable scale of thread to fabric, the Circular Interlacing Stitch will create a lovely neat boss which would have all sorts of wonderful uses in representing jewellery and embellishment. Instead, on my loosely-woven practise cloth it looks rather leggy and a bit thin. I’m glad to see that I got the interlacing right, and don’t have any twists or tangles in it, though!

The most difficult part of the stitch, I found, was laying the foundation interlaced crosses using the correct proportions and directions. Sometimes a larger thread count makes life harder rather than easier!

By contrast, it isn’t at all obvious that I even got the Figure Eight Interlacing Stitch right, although I am pretty sure that I did. It might have been better to pull all the wraps tighter to create a neater effect, rather than allowing the loops to create the uncontrolled springy appearance that they have at present. This is partly a result of the fact that I’m still reluctant to pull metal threads into tight loops because I don’t want them to strip their surfaces.

I do like the rich, textured braid effect that this stitch creates in the photographs in Tricia’s instructions, so I think it will be worth playing with it using different threads – not all of them metal, either – and seeing where it takes me.