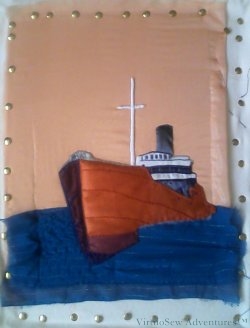 When I began to attach the slip, I needed to make sure that the background would be smooth and straight, so as the floor frame was failing to achieve that, I transferred the work to an old set of stretcher bars and used plenty of drawing pins to attach the fabric. I wasn’t concerned about holes in the fabric because the pins were well outside the area of the design that would be on show.

This photo shows the slip of the hull and superstructure, the funnel, and the masts finally attached. Each area was firmly sewn on using a suitable colour of stranded cotton (several different colours in the the case of the hull!), and the holes for the anchor chains were held down to let the background show through.

There are some small elements which yet need to be done on the ship – notably the rigging, but the next important element is the quayside. I had originally picked out two upholstery fabrics to choose between, one of them dark and heavily patterned, and the other lighter and smoother, but as it turned out both of them came in useful….