You may have noticed my glee last week at the launch at the “Stitches” trade show of two more “Designs Inspired by Clarice Cliff“. I enjoy designing for other people as well as myself, and it is always so satisfying when all the thinking, the planning, and the scrambling around the floor picking colours finally reach their culmination in the launch of the new kits. I usually design counted cross stitch for publication because my embroidery gets reworked on the fly so often that timetables might sometimes be unacceptably stretched. I’m hoping that what I learn by thinking about my embroidery designs and writing about my designs will help me to develop my skills to the point where my designs for publication need not be in counted work!

Last year I worked on some designs for a second company producing counted cross stitch kits, EQS Limited. EQS are now UK distributors for Madeira threads, and each kit contains full spiral packs of each colour, which they hope will help to differentiate their offerings from all the other kits available. Some of these kits have been launched recently, and I’m so pleased with them that I wanted to share them with you.

The four “Garden Scenes” were originally inspired by some of the gardens that were being developed at the Blists Hill Open Air Museum when I visited with my parents when I was in my early twenties. The designs  no longer bear any resemblence to the gardens I saw at the time – in particular, there was nothing so grand as an orangery with a summerhouse in front of it, as there is in the second design – but they do provide some sunny pictures of summer gardens – scenes which were in short supply in England last summer!

The last design here was I think inspired by the front garden of the Doctor’s house, and the view into the garden through the railings.  I added beehives to the first design because while I was working on the charts, there was so much in the news about the collapse of the bee population. Living as I do in a house with no garden at all I am in no position to keep real bees!

Naturally in working gardens such as the ones that were being developed at Blists Hill there would be very little lawn –  a lawn takes considerable upkeep without actually providing anything in return – but in the stitched versions there needed to be something flat to contrast with the plants, so I’ve stretched reality rather considerably there. 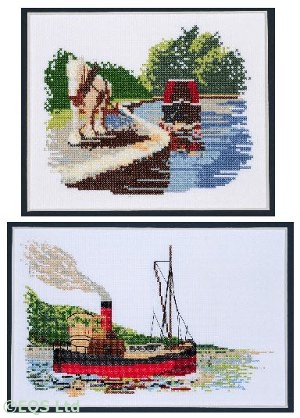 I have produced a second range for EQS Limited as well, this one entitled “Working Boats“. As the grand-daughter, great-grandaughter (twice) and great-niece (four times) of merchant seaman, it seemed very appropriate for me to offer a homage to the merchant and fishing fleets that support our island nations, and have done for centuries. The first two designs show, firstly, a canal boat on the Llangollen canal – a local tourist attraction throughout my childhood, and in a way a link to the Gardens, because the canals provided vital inland transport during the industrial revolution and beyond. The second design shows a Clyde Puffer, a very particular design of coasting cargo vessel with a flat bottom so that it could run itself ashore to be unloaded in places where there was no quayside. The mast is a cargo hoist, rather than a support for sails, since the puffer was developed after the invention of the marine steam engine.

There are four more designs in the range which we expect will be launched in the coming year. All I need now is a local needlework shop to go to so I can get a quiet thrill from seeing my designs on sale!

View all posts by Rachel
The Glittering Snail Finished! →
← The Camberwell Panel – Four