Last time, I found the stitches rather tricky in the gold thread and tried them in pearl cotton afterwards to see whether that made them easier. I’m not sure it did, as a matter of fact, but it did show me that the relative scale of fabric and thread would also influence not only the appearance of the stitch, but also the experience of stitching it.

So this time I started with pearl cotton. I can’t say it was markedly easier, especially the Cross Shaped Guilloche Stitch Variation. This time I think the thread was too heavy for the stitch at the scale permitted by the fabric, and furthermore it turns out that both of my practice cloths may be plain weaves, but they are not in fact proper evenweave fabrics, even if they look as though they should be.

I counted very carefully, but somehow it looks as though it should be enclosed in a rectangle and not in a square. It also looks rather a tangle!

The Guilloche Stitch Variation here is in fact the one I have seen in some of my books on embroidery stitches, although those have been somewhat simplified by comparison. Still, I can imagine using it to create a braid effect, and I’m sure that I will think of something to use the cross-shaped variation for, once I’ve had a bit more of a play, and tried to find the right scale of thread to fabric. 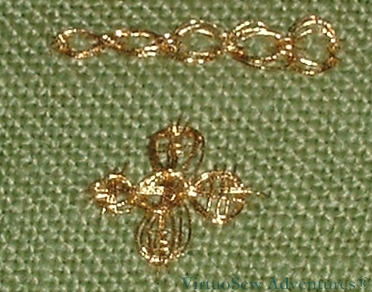 So, finally, here are the stitches in the gold thread. It’s harder than you might think to keep the thread in order, and in the end I decided to make a virtue of my difficulties and in the Guilloche Stitch variation I’ve got two of the sections showing a close, tight version of the wraps, while the other three are looser and more loopy.

In the Cross Shaped Variation, again I thought I had counted carefully, but again it didn’t come out quite square. I think I might try again but doing the stages in a different order so see whether that helps me in any way. I also found myself, in spite of all my efforts and in spite of having the instructions beside me, getting the thread wraps weaving over where they should have gone under and under where they should have gone over.

More practice needed, that’s for sure!

In fact, it occurs to me that there is a lot to be said for practising each of the stitches on the actual cloth before putting it in place on the sampler. Just as a final check. . .

View all posts by Rachel
The Lady By The Lake – another early project →
← A view from my bookshelf. . .