What with one thing and another, it is quite some time since you last saw Ankhsenpaaten. I had got quite a long way, and was pleased with progress, but still not entirely sure about her.

Then, of course, we had the Christmas period, and I don’t even attempt to stitch anything that requires serious concentration during that time. There are simply too many other things competing for my attention.

And besides, my favourite place in which to stitch is occupied by the tree….

So when I came back to her, I was full of trepidation. This seems like such a simple way to create an image, but in order for the “Stare Hard and Then Stitch” approach to be really successful, I need to have some sense of the whole thing in my head, so that the stitch sizes and threads all fall naturally to hand as each element is worked and reworked. The long break, and a variety of other things happening in the background, mean that my mental “map” of this piece had fallen out of my head, and needed to be painfully clawed back in again.

And “painful” was indeed the word. I’ve not regained the sense of surety I was beginning to feel at the point when I stopped working on it.

However, I continued to juggle with lights and darks, adding some of the details in the extension of the head and neck at the back which supports the stone in an upright position, staring and then stitching, and stitching and then staring.

I’ve brought the strong darks around the ears a little more to the fore, emphasized the light area down the side of the face, and brought a little more detail around the mouth and the line of the jaw.

There are elements of this I’m still not entirely confident about, but I am also becoming afraid of going too far, and ruining it by doing too much.

Time to stop, turn my back, and come back when my anxieties have stepped into the background and I can judge more truly. I’m declaring her “provisionally finished”. 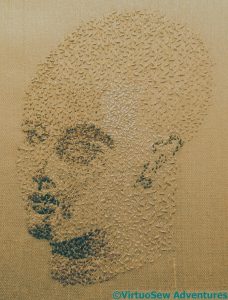 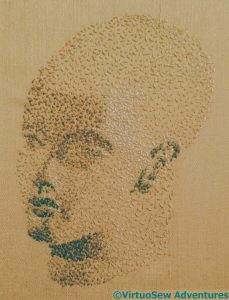 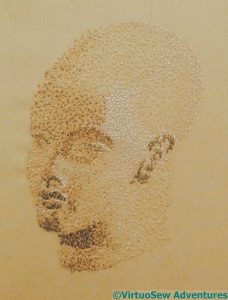 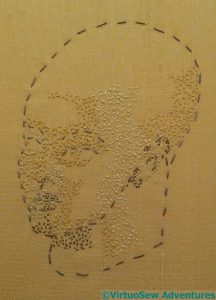 There is relatively little to say about Ankhsenpaaten, because the form will be created with loads of seed stitches in slightly different shades of silk thread, so there will simply be more of the same.

However, you may find it interesting to watch it come into focus, so I will post a series of pictures, along with what comments I feel I can make.

Do click on the pictures for a closer view, and a better sense of what is happening. 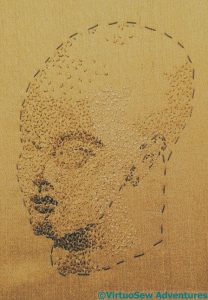 You can see from the earlier post that I only transferred the most basic of outlines, so I am using the photograph as my reference and working the various shades over one another to develop the layers of colour and shade.

I have started by trying to understand the most basic  planes of the face and the shades needed to bring them alive.

I tend to find it much easier to get my bearings if I can get some of the darker areas in, because that gives me the beginnings of a sense of depth and form. It is, however, a slightly terrifying approach, because there’s something so very definite about a truly Dark dark!

One of the shades of silk is very close to the fabric, but there is just enough difference that the light bouncing off it creates a sense of difference between inside the lines and outside the lines. 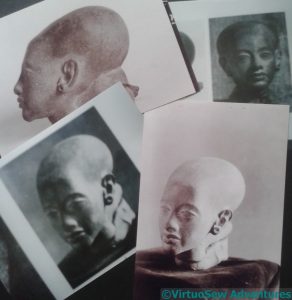 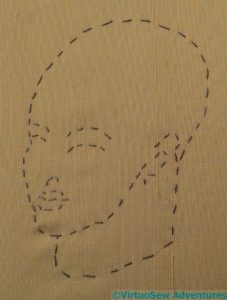 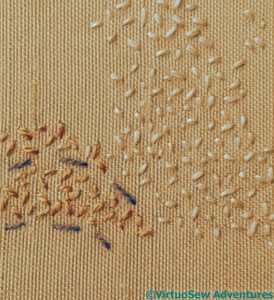