The Chairs Are Finished! 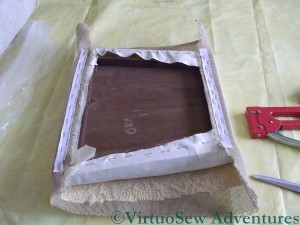 You may recall that I decided to finish off the canvaswork seat covers for the dining room. That entailed, removing the existing corded velvet covers, so I decided to increase the padding on the seats while I was at it. So I added a couple of thick layers of cotton linterfelt, and covered it with calico.

I’ve had some real upholstery done recently, and the upholsterer told me that staple guns cause less damage to the wood than nails (obvious, when you think about it), so that’s what I used. 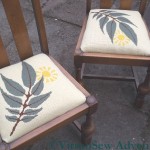 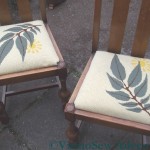 The staplegun has a kick like a mule, so the job had to be spread out over a couple of days.  Getting the tacks out of the last set of covers took a day all by itself, so I have stapled it through some cotton tape, to prevent whatever I may use in the future catching on the threads of the canvas. 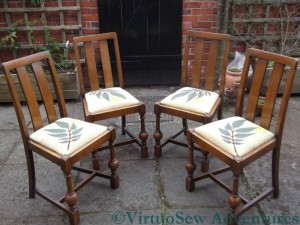 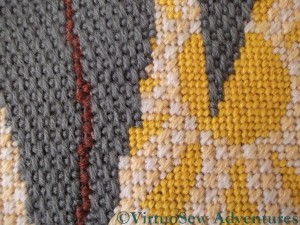 Close Up of the Sunburst

I believe I have mentioned before that our house is rather Arts & Crafts flavoured.  I’ve been working on our dining room almost since we moved in. It’s north-facing, and our predecessors had painted it pale blue and papered the ceiling turquoise with gold stars. We felt we were dining inside an iceberg!

That may explain why when I repainted it, the ceiling turned white and the walls sunshine yellow. Above the picture rail, I stencilled a eucalyptus leaf frieze (in deference to my husband The Australian). When in due course I inherited my Grandmama’s dining room  table and chairs, I decided to work needlepoint covers for the seats. 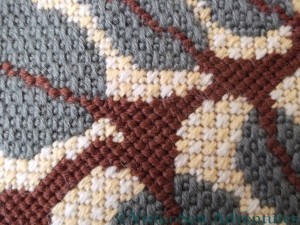 Close Up of the Leaf

Fortunately there are only four of them, but even so, I had to ask my mother to work on them as well, or they’d never have been finished. She helped with the stencilling as well – also an exciting challenge!

Unfortunately when they were finished I discovered some marks on some of the background. I was so dispirited that I couldn’t face unpicking them and so I stowed them away for several years.  Now, however, I have fished them out, and I am tackling the replacement of some of the rows of stitching, one row at a time.