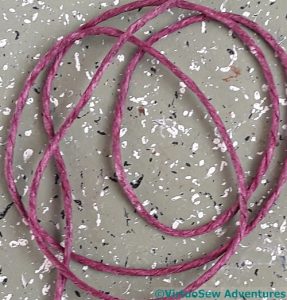 I’ve decided that Akhenaten’s headdress should continue with basketweave couching in crimson twist.  I was in a quandary about the padding for this – it would be dreadful to have white padding leering at me where the twist changes from up to down –  when it occurred to me to colour my own. So this is the ordinary cotton “string” used for padding, which I have coloured with one of my inktense blocks and a little aloe vera gel, and then waxed once it had dried.

Of course, the colour didn’t seep all the way through, as you can see from the whitish-grey ends of the couched pairs here, but at least the colour will ease back rather than drawing attention to itself.

You would think, by the way, that the waxed string would be fairly easy to couch in place, but it wasn’t. It had a will of its own, and far too many ideas about wandering off!

But it worked beautifully.

As I understand it, basketweave couching can be worked turning the thread at the end of each row, or sinking it. I would have liked to have turned it, as that is the more economical technique, but I felt that this would create the impression of a compact and complete shape, whereas – however stylised it is – this shape represents a three-dimensional object, the headdress wrapping around Akhenaten’s head.

That means more than 70 ends to sink, through silk, thin padding, and calico.

11 thoughts on “More Progress on Akhenaten”

The Society For Embroidered Work

You can now buy me a coffee!