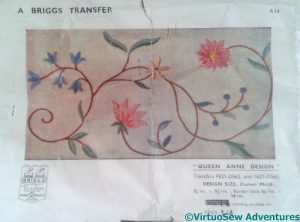 The Azorean Cutwork was not a very successful travelling project, as it needed to be precise, and the poor light of the average hotel-room made precision difficult.

I think this tea-cloth came from the same lady responsible for my fragment of the Quaker Tapestry, and the extra embroidery frames I knew I hadn’t bought. The instructions suggest a welter of unlikely colours and an excess of satin stitch, and I was nearly weak enough for follow them. 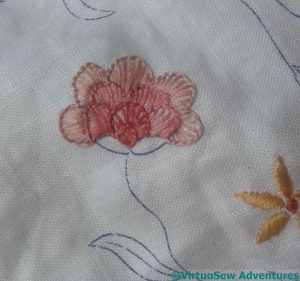 Then my mother pointed out that I’ve just done a single-stitch project, and should maybe cut loose a bit.

No sooner suggested than taken up! The wild colours are staying, but the stitchery will be a little more diverse…

After doing yellow satin stitch daisies with orange centres, I used blanket stitch fans for the next flower. I’m sure I’ve seen this before, or used it before, but I can’t remember where! 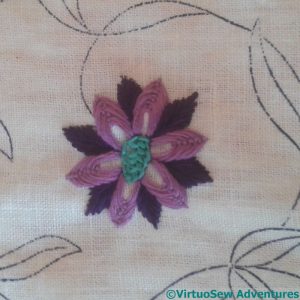 The purple flower is part of the corner motif, and alternates fishbone stitch (the dark petals) with nested fly stitches. The centre is a circle of blanket stitches with some random interlacing to fill them in.