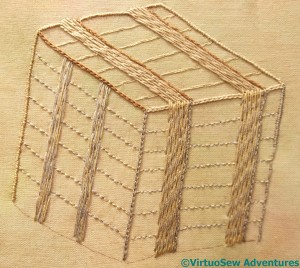 I’m rather afraid you’ll be fed up with this packing case. It’s caused me no end of thinking and re-thinking, stitching and re-stitching, but now I think I’ve done as much as can be done while it remains a separate piece. I may add more stitched details to the final piece, but that will be after I have everything else in place.

So the next job is to turn it into that separate piece which can then be attached in place on the background, and then itself become the background for the main adventure, which will be dressing the figures. 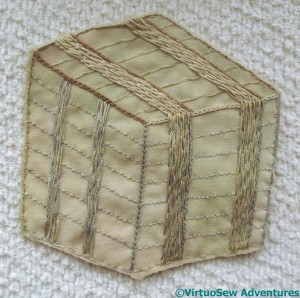 And here it is. I have left the fabric around the edges attached and folded it back to provide a little padding.

I’ve used single strands of  stranded cotton to hold the extra fabric in place, and trimmed the unbound edges close.

None of the planks run quite true, but since the whole thing is a wild experiment that may go dreadfully wrong, I’m not going lose any sleep over that. If it looks wrong when it’s finished, I’ll unpick those bits and put them right. If it looks right in spite of wonky planks, I shall pretend it was meant to be that way.. 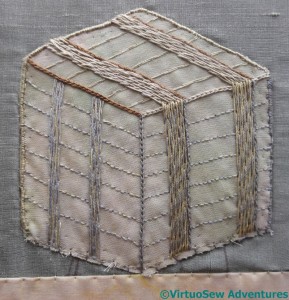 Thank goodness I marked a couple of points to help me put the packing case in place. I double checked the placement with the tracing paper people, then went around the edges catching them down with small stitches and a sharp needle.

As far as possible, I stretched the packing case as I was attaching it. It puts the turban cotton under some slight strain, but with all the support underneath, I think it will be fine. I would be much more worried if this were to be applied to a garment…