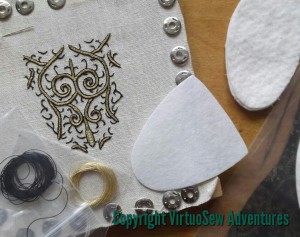 It has taken me a while to finish the embroidery for the Lady Catherine’s Slipper Needlework Nibble. In part this is due to our usual modern complaint of Life in general getting in the way, and in part it is due to my aversion to black. It will look lovely when it’s done, but anything that involves me working with black thread rather than any other colour is always going to be low on the list.  However, now it is done, and I move on to the question of Finishing…

Which means being a brave girl and messing around with glue, close to my careful stitchery and some absolutely gorgeous silk brocade. 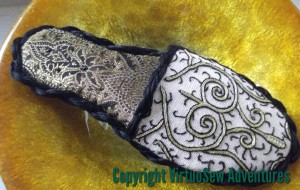 Since glue is involved, and has to dry between each stage of the assembly, it took several episodes, spread over a couple of days, but I got there in the end, and I’m very pleased with it.

I photographed it lying across a Limoges enamel bowl belonging to my parents, so that it would show up nicely against against the glossy enamel background. 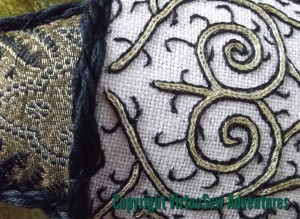 Close Up of the Slipper

The gold thread is a really fine one, and the spidery black tendrils embellishing the black border help it to stand out against the base fabric.

My cord-making skills could use some improvement, I think, as the cord sewn around the edge isn’t entirely even, nor is it as tightly twisted as I would have liked. It is, however, rather better than the one I made for the Glittering Snail, so at least there are signs that Practise is indeed Making Perfect!