The Hittite Amulet – progress of a sort!

Home | Dreams of Amarna | The Hittite Amulet – progress of a sort! 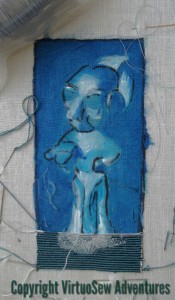 Progress On The Amulet

Now that I have started on the main design element of the Hittite Amulet, I am entering a familiar and disheartening stage. There is so much more to do, it’s very concentrated work, and at the moment, I’ve not done enough to be confident it will work at all.

In fact there is a good chance that until it is completely finished, I won’t be sure that it is working, which in turn means I need to ignore my doubts and just keep at it!

The fact that I have several needles with different shades of thread in them, all working at once, will explain why I can’t do very much at a time – I need to avoid tangling the threads, and as soon as I start to get tired, the threads tie themselves in such convoluted knots they’d make a macramé expert think twice! 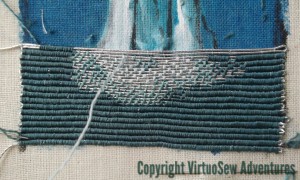 Many Threads In Progress

This close up should give you an idea of what is involved. I decided to allow the coloured silk stitches on the Amulet to be either across the same pair of threads as the background, or across pairs which are off by one. This should allow me to be a little more precise in colour placement. It may or may not matter, but I felt that since this is such a strange piece, I wanted to have as much flexibility as possible.

I have already discovered that in some ways the straight rows are harder than the spiral that I used for Christus Natus Est. As the backing fabric sags, and the stitching became more widely spaced over the Amulet, I found that the rows were no longer straight. I’ve spent several sets of rows geting the rows more or less straight again, which was just a little scary!