More on the Elephant of Infinite Charm

Home | General Embroidery | More on the Elephant of Infinite Charm

You may recall that last week I said I was thinking of working one of the new interlacing patterns on the Elephant’s saddlecloth. I ferreted around in my box of metallic threads and found several golds and coppers to choose from. Finally I chose a warm copper, and looked up the instructions for the interlacing.

I really didn’t like the look of it at all.  Somehow it looked tangled and rather moth-eaten, instead of exotic. Not A Good Look, so out it came. 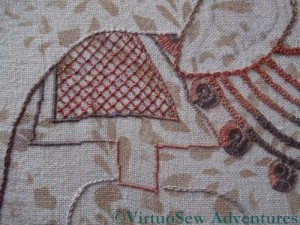 So in the end I decided to use ordinary trellis couching. The couching stitches are upright cross stitches in the copper thread, over a silk foundation. It looks a little dull in the photo, but in real life the little sparkle of copper “lifts” it nicely, and I think it will work well.

You might also notice that I’ve finished outlining him, using the thread that shades from brown to cream. It means that his edges aren’t always emphasised to the same degree, which I think is a good thing.

Artists talk of “light and shade”, and we usually interpret that as meaning simply that the patterns of tone are what build up a recognisable image. To an extent that is correct, in that if the tones are wrong, a picture won’t work well. When we are talking of a design of lines rather than shapes, however, it’s less obvious what we mean.  I am trying to create a pattern of varying densities of stitching as well as colour, and in the end what I hope to have achieved is a pleasing rhythm for the eye to follow, not “sticking” anywhere, but not frantically jolting from one part of the design to the next.