The Red Panel on the Nefertiti Shawl – Part Two 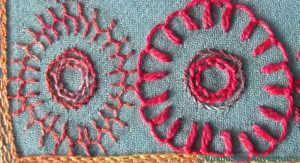 Moving on to the next set of stitches…

The circles weren’t perfectly drawn, so the slightly wonky appearance of perspective is partly owing to that. The lighter coverage is Cretan Stitch. I often have trouble using cretan stitch in my more figurative projects, so I’m hoping that being reminded of it will help me to find uses for it in future. Up and Down Buttonhole stitch is an old favourite, as long term readers will know. I’ve done it more neatly, but I always enjoy stitching it. 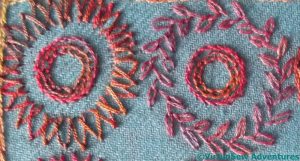 This pair was actually among the last to be finished. Italian Border Stitch can be described as a fly stitch with a French Knot instead of a straight stitch. First I did a single row, and it looked a bit thin, so I added a second layer. Much better!

The second circle is in Chained Feather Stitch. This one curves well around  the circle, and has something of the feel of a victor’s laurel wreath about it. Maybe an omen for me finally finishing the Dreams of Amarna in the next year?

The Red Panel on the Nefertiti Shawl – Part One 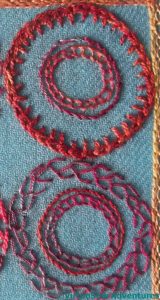 Once the colour scheme was sorted out, I decided that I was going to try my usual trick again. There are elements of the panel which will be the same, and other elements which will change. The combination ensures that there is interest everywhere, but rhythm and similarity to help the eye rest.

The first circle here is done in Chained Blanket stitch using a silk perle in a warm russett-y red. Chained blanket stitch is one I’ve rarely used, but I’ve decided I like it. It produces a strong edge, and a pleasing texture. The second circle is in a rather finer silk thread, with a blueish tone – counterchange again, you see. This time I used Closed Feather stitch, which is one of the old faithfuls… 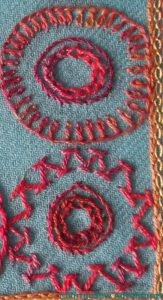 The next two continue the theme…

The outer circles are in Basque Stitch (top), which is another stitch with a family resemblance to chain stitch and blanket stitch, this time using two strands of stranded silk, and Chevron Stitch, in another silk perle. Chevron Stitch is an old friend, but as you see, it doesn’t run happily around curves – or at least, not curves as tight as this.

Still, the counterchanges of russet against burgundy, thick against thin thread, same stitches against new stitches, all seem to be working so far… 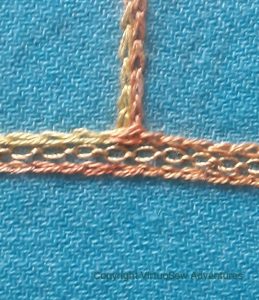 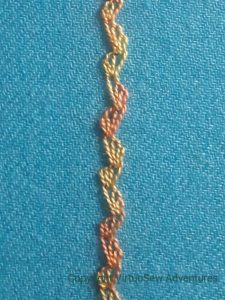 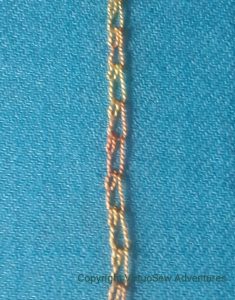