Typed on camelback in a sandstorm

Home | Dreams of Amarna | Typed on camelback in a sandstorm

One of the reasons Mary Chubb was sent out to Egypt with the Expedition was to ease the administrative burden in London by bringing the administration of the dig under control. In the nineteen twenties, of course, typing was not the mundane skill it has become, and although there was a typewriter in the Dig House, the excavation directors were not skilled in its operation, producing typed reports that looked, in Mary’s words, “as though they had been typed on camelback in a sandstorm”.  The first task when a report arrived had always been to retype it into a more legible format so that no-one other than the secretaries would have to struggle to decipher it.

When she is out in Egypt, she soon discovers that some of the difficulties are not easily surmountable, even by an experienced typist. Sand adheres to the damp ink left by the typewriter ribbon, creating “a rather pretty embossed effect”, which sadly she isn’t always in the mood to appreciate, especially when dragged away from difficult, painstaking typing of lists to help with the excavation of delicate finds.. 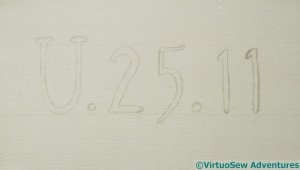 It was easy enough to work out how to represent the sand sticking to the paper – close-packed French knots in a mixture of sandy colours – but not so easy to decide what text to use.  Maybe “faience”, a commonly used material for jewellery and ornaments? The names of the expedition members? References ascribed to finds?

In the end I settled on “U.25.11”, which was the site grid reference for the Expedition House, which was built up on the remains of an original house of the Amarna period. I don’t, of course, know precisely which typewriter Mary used, so I have sketched onto the fabric something that looks a little bit like typescript. It isn’t exactly right, but the letter and digit forms have been sketched from looking at the letters in a typescript we recently found, of an article my father wrote in the 1960s. My whole family is going to be involved in this project, whether they like it or not, and by whatever circuitous route I may devise…

View all posts by Rachel
Housekeeping →
← A Sampler Tool Case