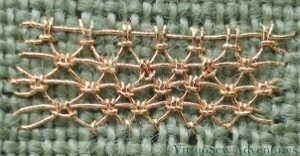 Up And Down Blanket Stitch - Alternating

As it happens, the Up-and-Down variant is one of my favourite stitches, so I sat down rather gleefully to have a go. This is the first of the variations, Alternating Up-and-Down Blanket Stitch, which produce a rather open, netlike appearance on my practice cloth, not much resembling the example in the instructions. 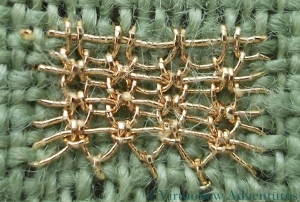 Up And Down Blanket Stitch With Return

The second stitch was Up And Down Blanket Stitch With Return. In this case the seconfd row of stitches goes into the tie of the Up And Down Blanket Stitch, creating a ribbed effect something like the welts on a sweater. It also rather conceals that same distinctive tie stitch, rather camouflaging the stitch that forms its basis. I’m very impressed that Tricia managed to “reverse-engineer” these stitches, as some of them are rather less than clear to work out! 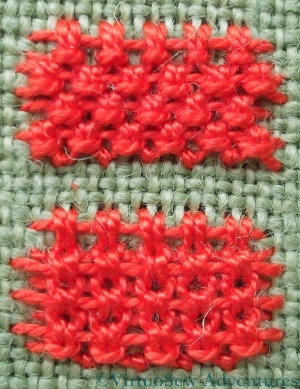 Both Stitches In Pearl Cotton

Naturally, my practise cloth version in the gold thread suffers from the problems of scale I’ve already discussed, but as well as that I find when I look at the photographs that in a couple of cases I have done a pair of buttonhole stitches instead of an Up-and-Down Blanket Stitch. I defy anyone to work that out at the normal scale of these stitches, but I’m actually quite surprised that I didn’t notice at the time, since the short loop at the base of up-and-down buttonhole stitch does tend to twist when worked as a needle-lace stitch instead of a fabric stitch!

These versions worked in pearl cotton show much more clearly the heavily textured fabric that these stitches form when worked at the correct scale.

View all posts by Rachel
Frolicking Teddies – Part One →
← I am not alone. . .