Some Work On The Map of Amarna

Home | Dreams of Amarna | Some Work On The Map of Amarna 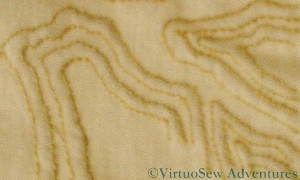 Contour Lines on the Map of Amarna

Fortunately for me, I’d already had plenty of ideas for working the Map of Amarna for the first of the background panels, and in fact, as soon as I decided to include it there was one section about which I was absolutely certain – the contour lines. I’ve worked them in Reverse Herringbone Stitch. The fabric between the lines is thus slightly raised – padded by the threads behind it. I got this far on the map quite some time ago and was very pleased with myself when it turned out Just As I Hoped. 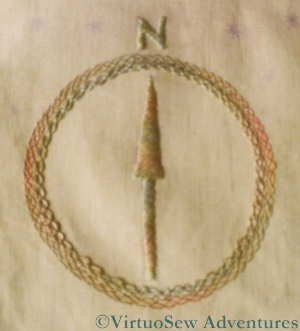 Compass Rose on the Amarna Map

Then I moved on to another section and found myself struggling. In the drawn map, the compass rose is indicated by three lines. When I tried that, it looked clunky and rather sad. So I returned to my stitch dictionaries, and looked for line stitches. Cable Chain Stitch was an obvious choice, as it has been a favourite of mine for years, and the outer ring is worked in Closed Feather Stitch. I used two Caron Collection threads in the same colourway here – a single strand of the heavy pearl cotton type which has three strands (Watercolours, I think it is called),  and the much finer one, which I think is Wildflowers. It is interesting to watch the colour changes  as they appear very different and have different emphases in the different threads.

I may yet decide to run a “shadow” to one side or the other of the arrow, using a simple stitch such as stem stitch, to throw the satin stitch into stronger relief, but for the moment I am happy that the flatter outer ring creates the illusion of a raised compass rose, while still being clearly something stitched.