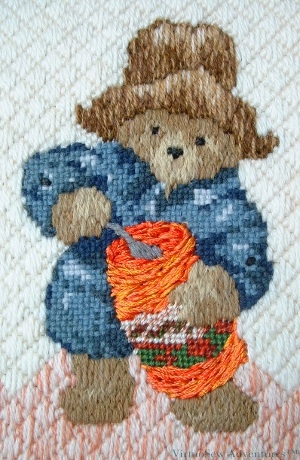 I’ve always had rather a weakness for Paddington Bear, and this painted canvas caught my eye a few years ago, hanging up in a market stall in Leeds when we were visiting friends. Immediately I saw in my mind’s eye how almost every section could be worked, starting with using rayon thread for the jar of marmalade. In fact, as I recall, the part of this canvas that gave me the greatest difficulty was the choosing a stitch for the background!

Paddington’s duffle coat is worked in Linen Stitch using ordinary tapestry wool, and his fur is worked in Appletons wool using a sort of random, closely packed long and short stitch. Looking at this piece analytically for the first time since I worked it, I’m really quite pleased with how the Linen Stitch works for the dull woolly fabric of the coat, and how believable the fur has turned out to be. 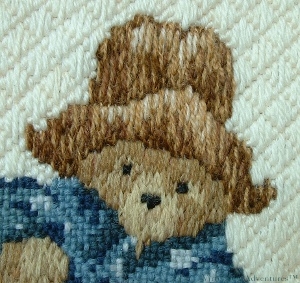 I’m also very pleased with how different the hat looks. It too is worked in long and short stitch, but I used longer stitches and Paternayan Persian wool. The difference lies in thickness of the individual strands and the different level of sheen – Persian wool strands are rather thicker and have a lovely muted sheen, whereas the Appletons wool produces a slightly duller surface. The tapestry wool, of course, is almost completely matte.

Look at that little face! The only thing I missed is a smudge of marmalade on his nose.. 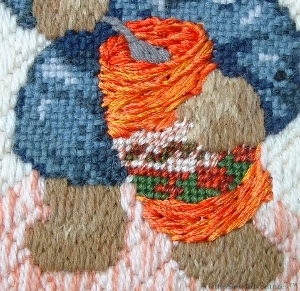 Then there is the jar of marmalade that first caught my eye in the first place. I worked that using six strands of rayon, mixing orange, red, and yellow strands in the needle, and working rows of stem stitch around the jar. It looks much glossier and stickier in real life!

Finally, after much head-scratching and puzzling, I worked the background in a slightly enlarged version of Hungarian Stitch, using Persian wool. I blended a second colour into the base to give a sort of grounding section so that Paddington wouldn’t be suspended in mid-air. I can’t think why the designers didn’t do that, as when I was a child (I’m assuming this was really intended for children and not for grown-ups!) I would have been rather worried by the character not having any ground beneath their feet!