I’ve not come near finishing the silk work on the  Spot Sampler, so I am going to do some practising first. The fabric is a heavy plain weave, about 16 threads to the inch. Compared with the linen for the actual piece it is almost like binca! I chose it to give me some chance to see what I was doing and to count the threads if it proved necessary for the stitches. It wasn’t really for the first two, but I did so anyway! 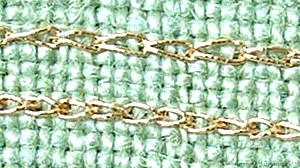 This produces, to all appearances, simple chain stitch, but it doesn’t involve the “scooping” motion used when working in the hand and seems somewhat easier to control.

I’ve done it both over three and over two threads. 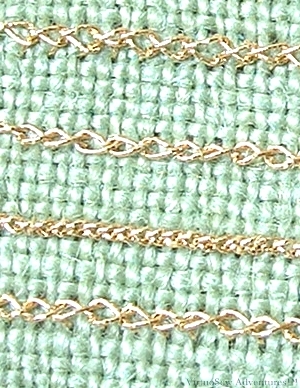 Reverse Twisted Chain Stitch
Again, the resulting appearance is of simple twisted chain but the stitch is worked backwards, I think this reduces the chances for the gold thread to snag on itself, which certainly helps.

As shown in the original diagram, it is worked over a grid in effect, of two threads by two.  After doing that fairly easily I decided to play a bit.

So I worked several variants, over two by four, two by one, one by one, and two by two.

The one by one was quite a challenge, but I am pleased that I have an impression of the changes in appearance effected by the different stitches.