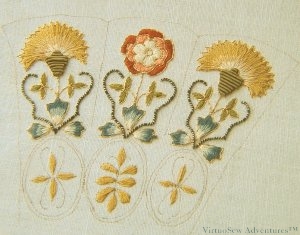 So, making progress here. All the silkwork is outlined in Elizabethan Twist, carefully following the suggested paths so as to have the smallest possible number of ends to sink.

Then the calyxs of the two carnations are covered with Olive smooth purl, cut to size and treated like a bead. This was fairly tricky because it was easy for the end of the purl (which is a very fine wire, coiled up) to catch on the silk thread being used to sew it down. In fact for the second calyx, I waxed the thread, which made the whole experience less fraught! I notice I didn’t quite get all the lengths or maybe spacings right for the first calyx, but for now I shall leave it as it stands.

Then I couched the striped thread curlicues. Again it was tricky to place the black couching thread where it would disappear into the thread being couched, but I think a few tweaks with a needle will fix that! 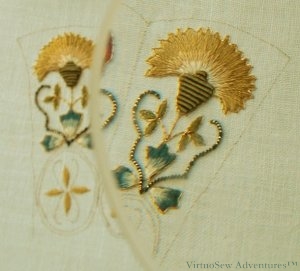 Through A Glass Clearly

Finally, I thought I would show what a difference a magnifier makes. As I think I have said before, it is the change in size that terrifies. I began by stitching without a magnifier and was reasonably happy doing so. I just felt that it would be a useful additional tool, especially given some of the other projects I have in mind.

My eyes become accustomed to regarding the magnified view as normal, then when I stop for a cup of tea, I push the magnifier to one side to have a “proper” view. At which point there’s a small squawk and my husband asks what’s wrong. “It’s gone all tiny”, I say, “Don’t tell me I stitched that!”. After the said cup of tea, ordinary views reassert themselves and it doesn’t seem quite so astonishing.

Which is really just as well. We don’t embroider to scare ourselves, after all!

View all posts by Rachel
Look What I’ve Found! →
← Starting Another Course